Enter the security code shown above

DEBRIZYME is  an  aerosol wound dressing spray.  DEBRIZYME aids in  the treatment of external wounds and also assists healing through debridement and by stimulation of epithelial tissue.

DIRECTIONS FOR USE
Shake the can before use. Use the extension nozzle supplied to spray directly onto the wound site. Apply 2-3 times a day. Avoid spraying into eyes and on fresh arterial clots.

WOUND HEALING STUDY
Three cases showing open wounds were brought in for treatment. Two were dogs,  both  of which  had  necrotic, contaminated open wounds.  Dog  I  had  been  in  a dog  fight  and  had  had  a piece  of flank  removed;  Dog 2 had  been  hit by a car and suffered a dorsal degloving wound to the left front paw. Both cases were treated  with  a course  of oral antibiotics (amoxicillin/clavulanic acid).The wounds were cleaned and sprayed with DEBRl2YME (Kyron).Acriflavine in Glycerin (Kyron) was then applied and the wound covered with a dressing.The dressings were changed daily and DEBRl2YME was sprayed on the wound before each application of Acriflavine in Glycerin. 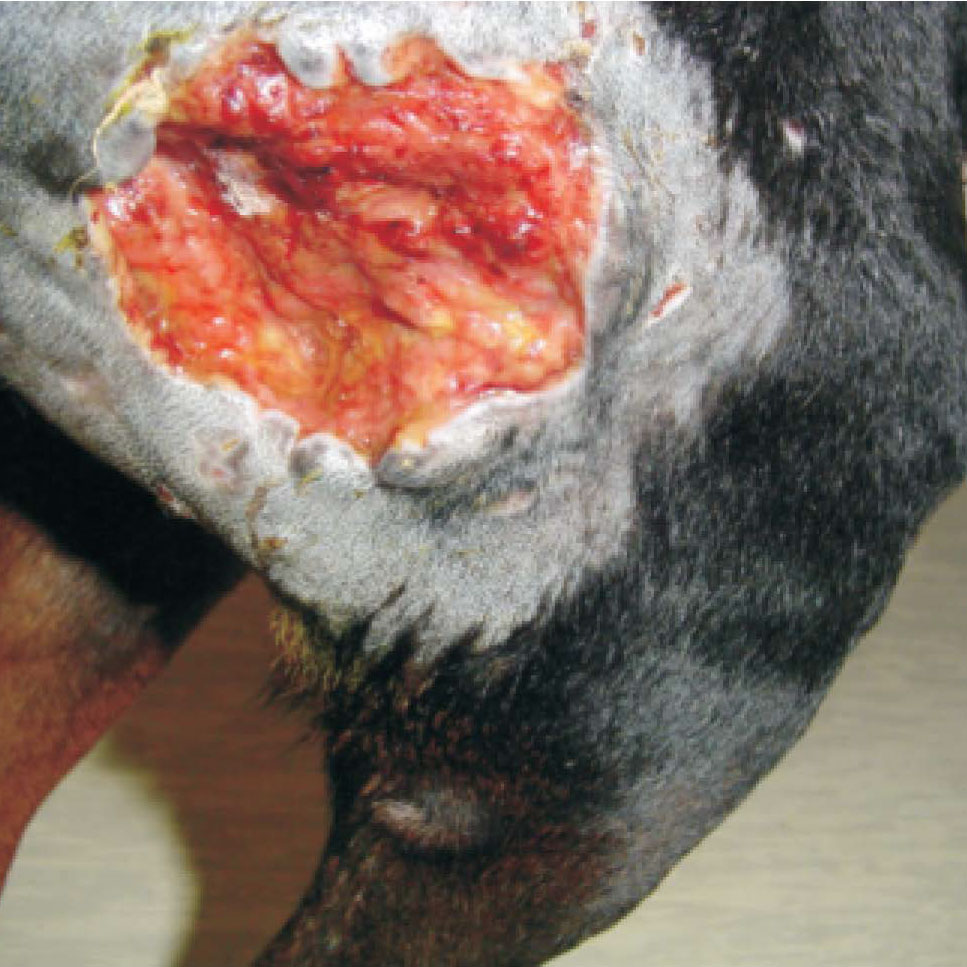 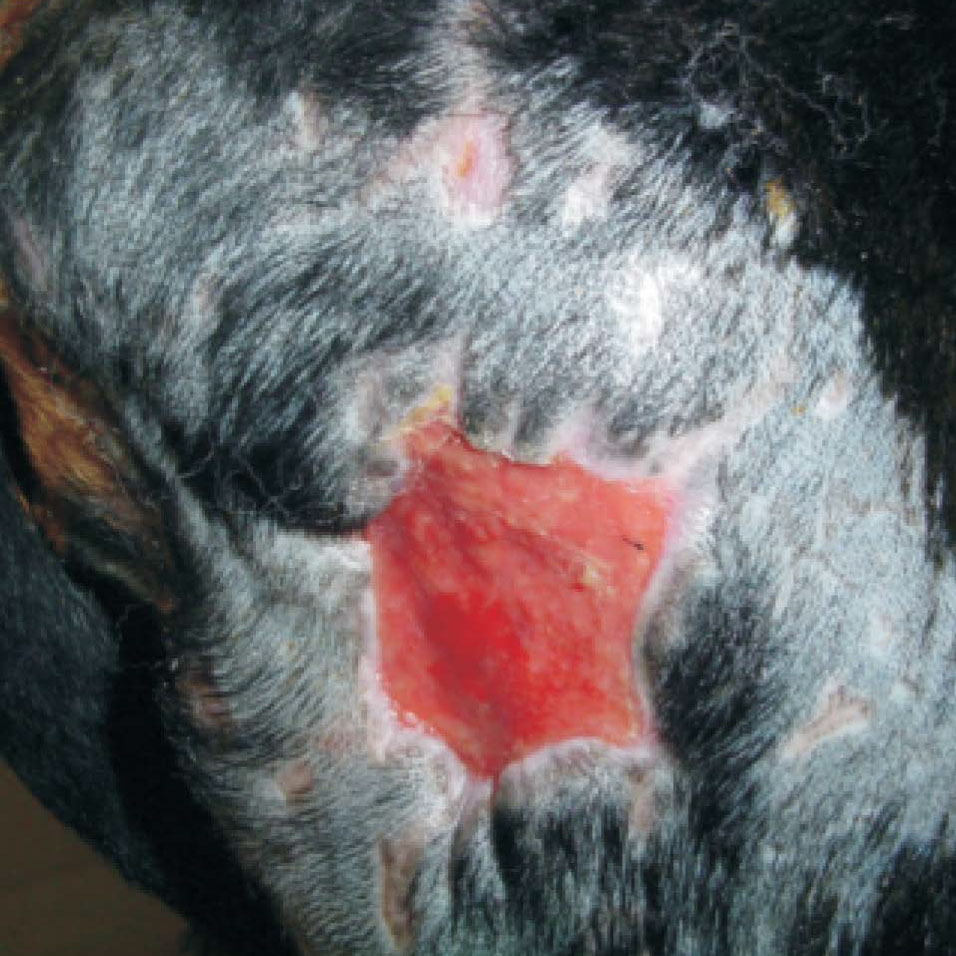 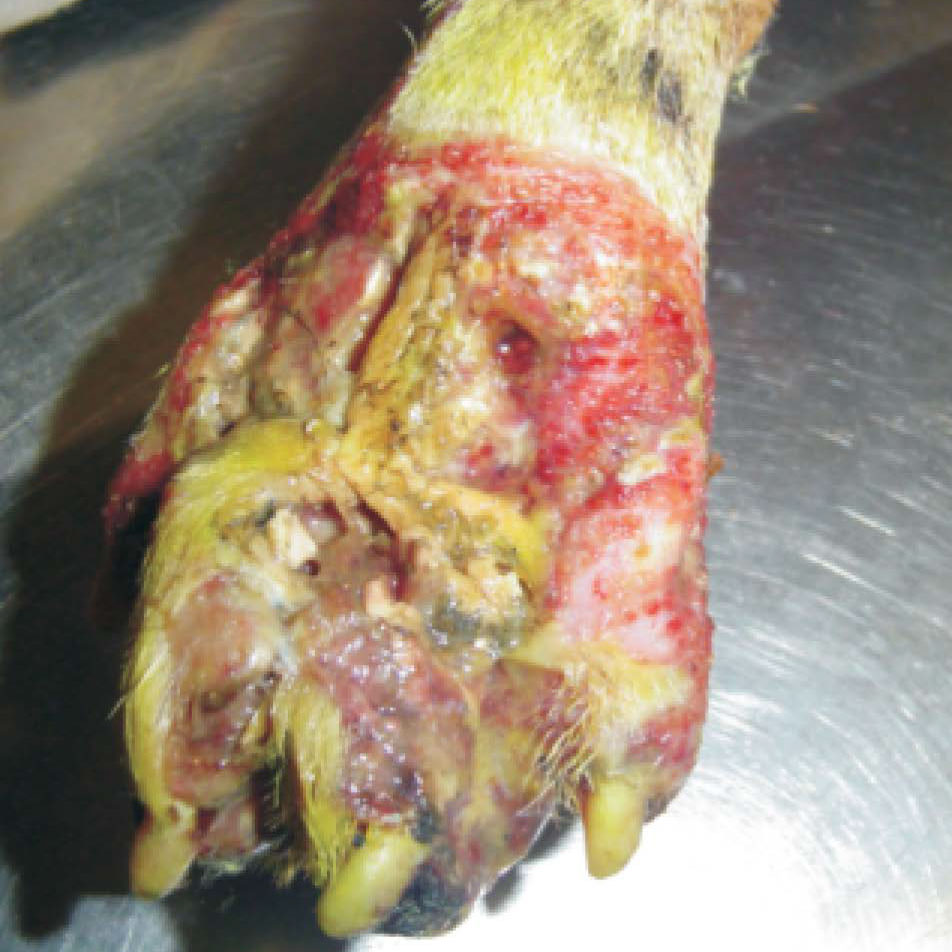 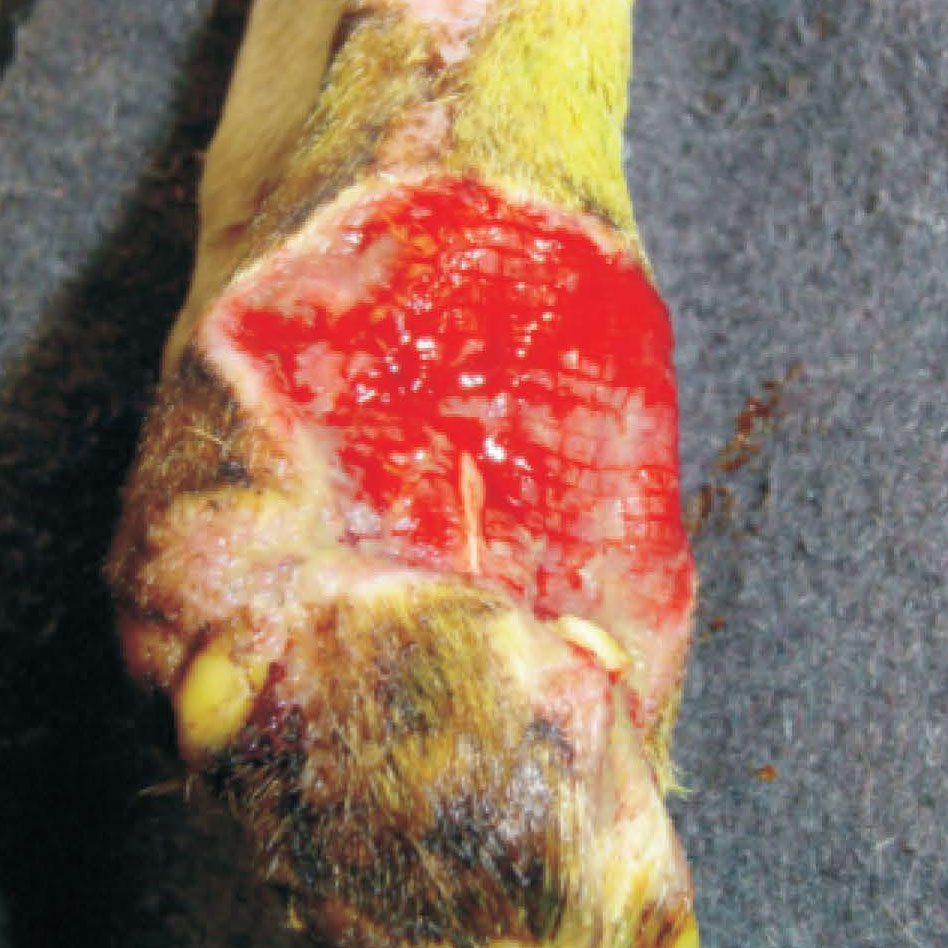 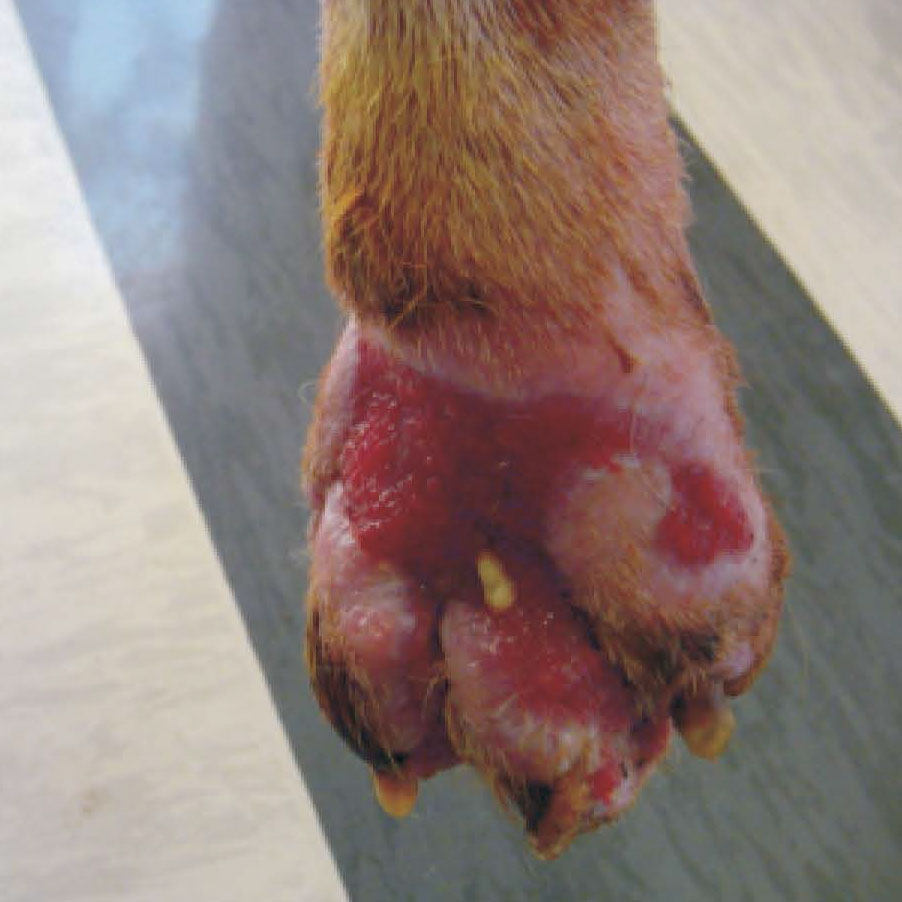 A cat, the third case, presented with a wound on its left flank which had been left untreated for some time. The resulting abscess burst, leaving a gaping open wound.The cat was treated with a course of oral antibiotics (amoxicillin/clavulanic acid) and DEBRIZYME alone applied daily. 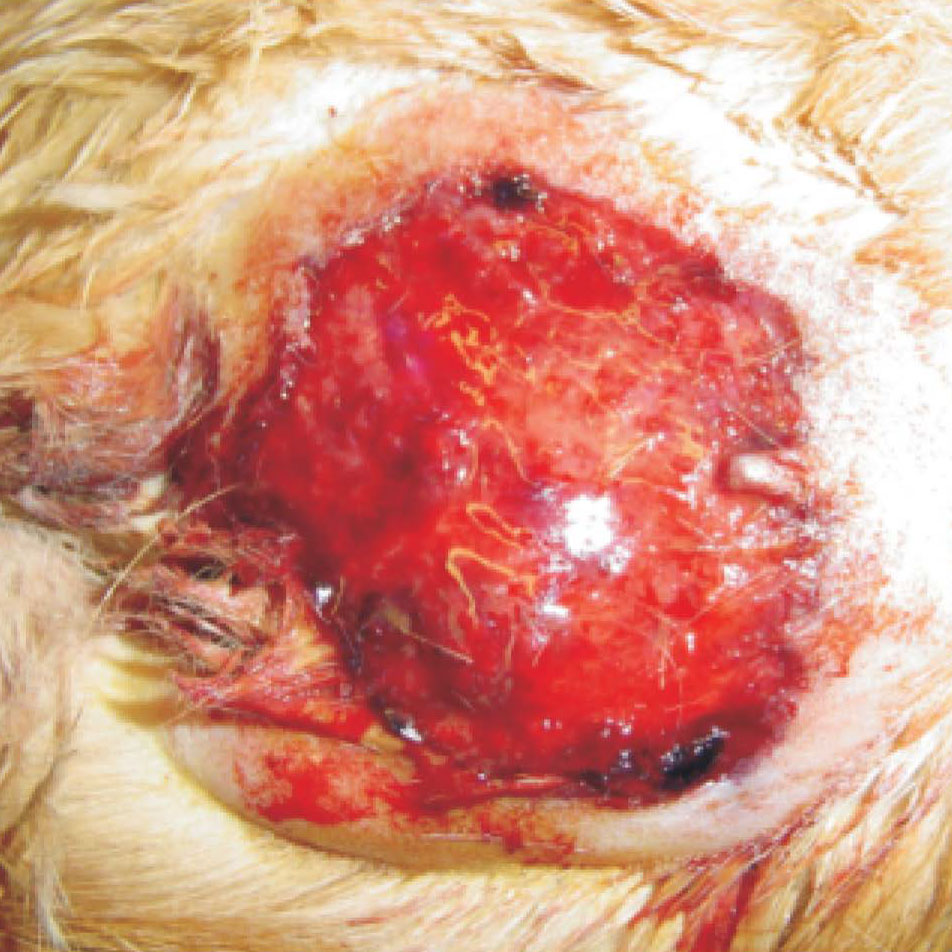 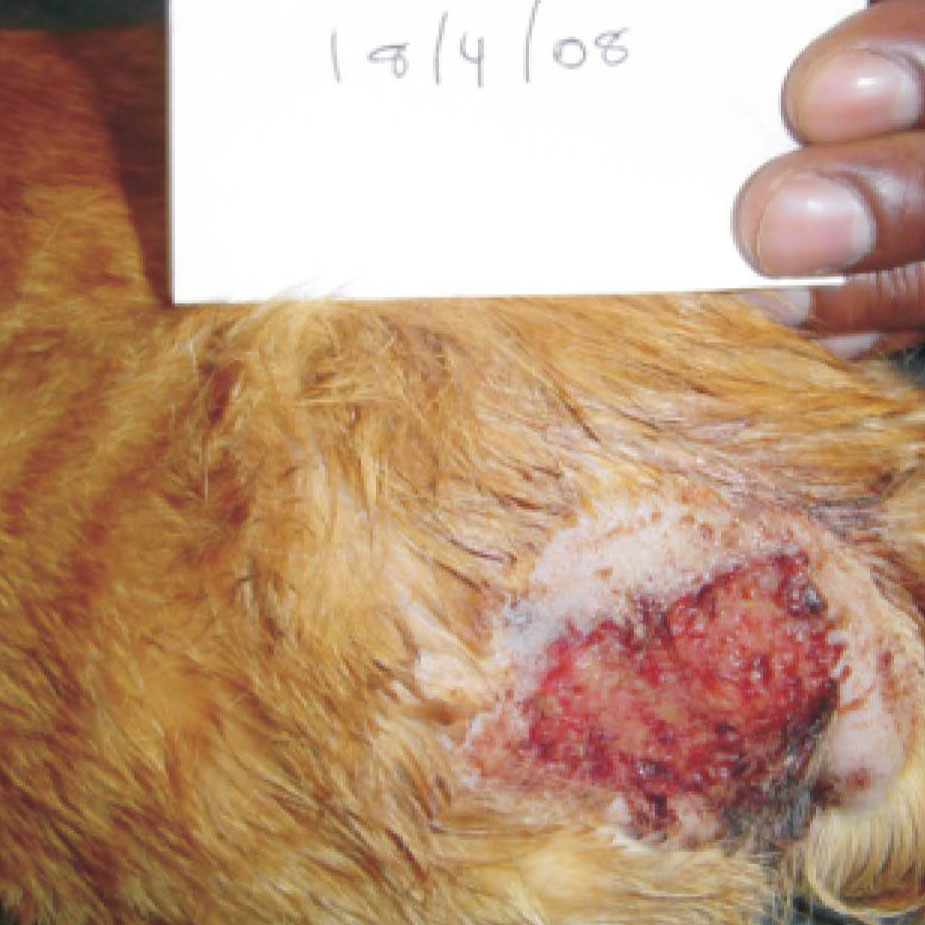 DEBRlZYME chemically debrides necrotic tissue and stimulates growth  of epithelial  tissue,  which  accelerates  the wound healing process. Trypsin, the debriding agent, is especially important in the first few days when the wound is contaminated and filled with necrotic tissue. Castor oil and  peru  balsam  also  speed  up  epithelialisation.  The overall effect is an acceleration in wound healing, as can be seen by the healthy  granulation  tissue  evident  in  the  later photographs.

Acriflavine in Glycerin, with its mild antibacterial action, is very useful for the treatment  of contaminated  or infected wounds as it promotes wound drainage and has a hygroscopic effect.
All wounds continued to decrease in size with open wound management, and healed well.